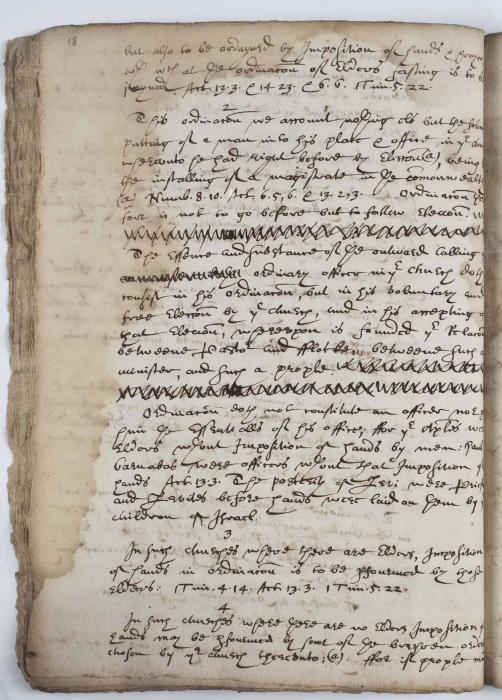 but also to be ordayned by Imposition of hands & prayer,

wth wch at the ordination of  Elders fasting is to be

This ordination we account nothing els but the Solem[n]

the installing of a magistrate in the commonwealth

fore is not to go before but to follow Eleccion. [struck through]

The Essence and Substance of the outward calling o[f]

consist in his ordination, but in his voluntary and

free Eleccion by ye church, and in his accepting of

betweene Pastor and Flocke, betweene such a

minister, and such a people. XXXXXXXXXXX

Ordination doth not constitute an officer, nor g[ive]

him the Essentials of his office; For ye Aples were

barnabas were officers wthout that Imposition of

hands Act.13.3. The posterity of Levi were Preists

and Levites before hands were laid on them by ye

In such churches where there are Elders, Imposition

of hands in ordinacion is to be pfourmed by those

In such churches where there are no Elders, Imposition of

hands may be pfourmed by some of the brethren orderly