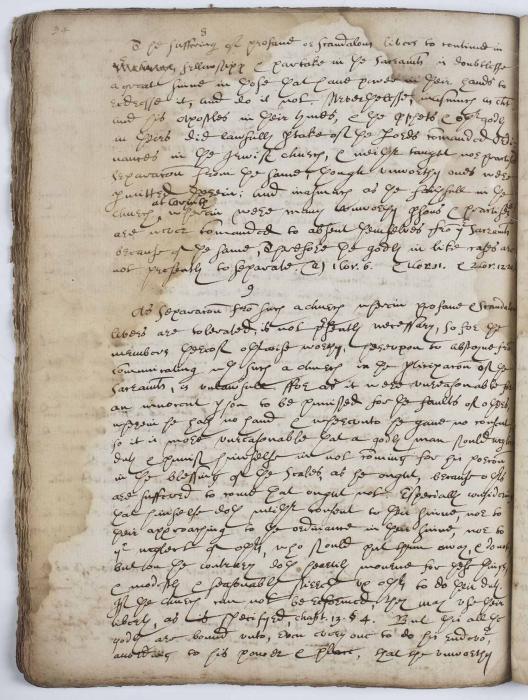 To the suffering of profane or scandalous livers to continue in

redresse it, and do it not. Neverthelesse, inasmuch as cht

and his Apostles in their tymes, & the Pphets & other godly

in theirs did lawfully ptake of the Lords commanded Ordi=

nances in the Jewish church, & neither taught nor practiced

Separacion from the same, though unworthy ones were

pmitted therein; and inasmuch as the faithfull in the

were never commanded to absent themselves from ye Sacramts

because of the same, Therefore the godly in like cases are

livers are tolerated, is not prsently necessary, so for the

communicating wth such a church in the pticipacion of the

Sacramts, is unlawfull. For as it were unreasonable for

an innocent pson to be punished for the faults of others,

wherein he hath no hand & whereunto he gave no consent,

so it is more unreasonable that a godly man should neglect

duty & punish himselfe in not coming for his porcion

in the blessing of the Seales, as he ought, because others

are suffered to come that ought not. Especially considering

that himselfe doth neither consent to their sinne, nor to

their approaching to the ordinance in their sinne, nor to

ye neglect of others, who should put them away, & do not,

but on the contrary doth heartily mourne for these things,

& modestly & seasonably stirre up others to do their duty.

If the church can not be reformed, they may use their

godly are bound unto, even everyone to do his Endevor,

according to his power & place, that the unworthy