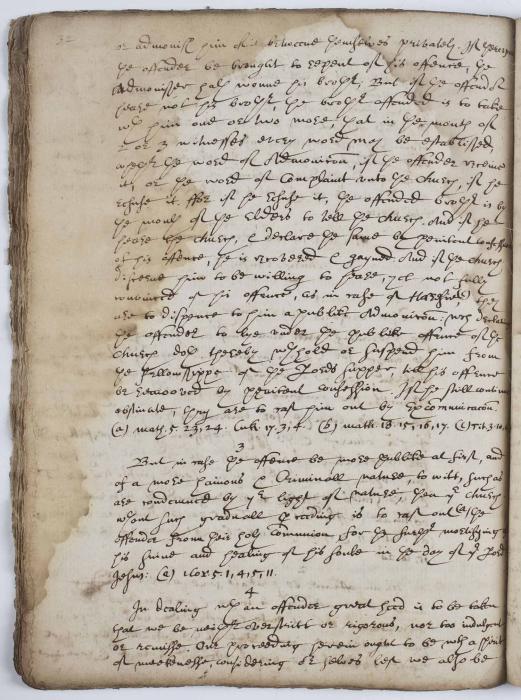 or admonish him of it betweene themselves privately, If thereupon

the offender be brought to repent of his offence, the

Admonisher hath wonne his brother; But if the offender

heare not his brother, the brother offended is to take

wth him one or two more, that in the mouth of

2 or 3 witnesses every word may be established,

whether the word of Admonicion, if the offender receive

it, or the word of Complaint unto the church; if he

refuse it. For if he refuse it, the offended brother is by

the mouth of the Elders to tell the church. And if he

heare the church, & declare the same by penitent confession

of his offence, he is recovered & gained. And if the church

discover him to be willing to heare, yet not fully

convinced of his offence, as in case of Haresie(c), they

are to dispence to him a publike Admonicion: wch declaring

the offender to lye under the publike offence of the

church doth thereby wth hold or suspend him from

the fellowshippe of the Lords Supper, till his offence

be remooved by penitent confession. If he still continue

obstinate, they are to cast him out by Excommunicacion.

But in case the offence be more publike at first, and

of a more hainous & Criminall nature, to witt, such as

are condemned by ye light of nature, then ye church

offender from this holy communion, for the further mortifying of

In dealing wth an offender great heed is to be taken

that we be neither overstrict or rigorous, nor too indulgent

or remisse. Our proceeding herein ought to be wth a spirit

of meeknesse, considering or selves lest we also be