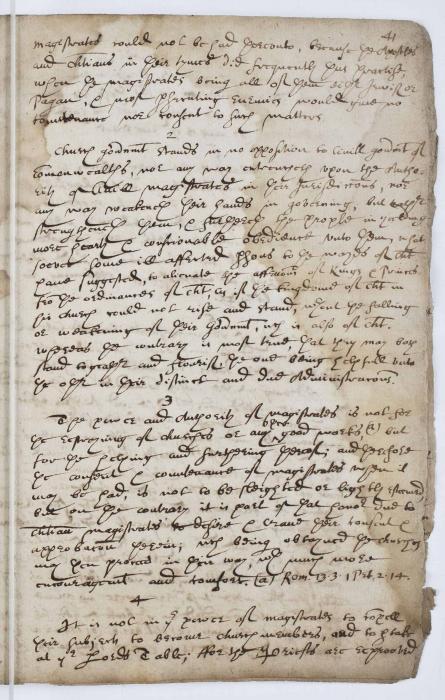 magistrates could not be had thereunto, because the Apostles

and chtians in their tymes did frequently thus practice,

when the magistrates being all of them either Jewish or

Pagan, & not psecuting enemies would give no

countenance nor consent to such matters.

Church govnmt stands in no opposition to civill govnmt of

rity of Civill magistrates in their Jurisdictions, nor

any way weakeneth their hands in governing, but rather

strengtheneth them, & furthereth the people in yielding

more hearty & conscionable obedience unto them, what

soever some ill affected psons to the ways of cht

have suggested, to alienate the affecions of Kings & Princes

from the ordinances of cht; as if the kingdome of cht in

his church could not rise and stand, wthout the falling

or weakening of their govnmt, wch is also of cht.

whereas the contrary is most true, that they may both

stand togeather and flourish, the one being helpfull unto

the other in their distinct and due Administracions.

The power and Authority of magistrates is not for

the restraining of churches or any ^other good works(a), but

for the helping and furthering thereof, and therefore

the consent & countenance of magistrates when it

may be had, is not to be sleighted or lightly esteemed,

may then proceed in their way, wth much more

It is not in ye power of magistrates to compell

their subjects to become church members, and to ptake

at ye Lords Table; For the Priests are reprooved