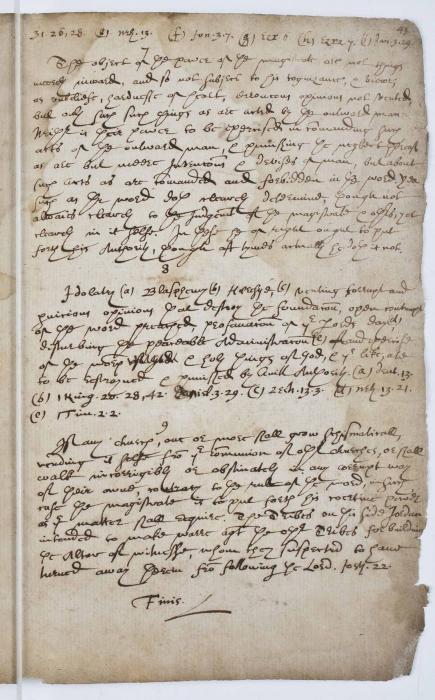 The object of the power of the magistrate are not things

merely inward, and so not subject to his cognizance, & viewe,

but only such such things as are acted by the outward man:

Neither is their power to be exercised in commanding such

acts of the outward man, & punishing the neglect thereof

as re but mere Invencions & devises of man, but about;

such acts as are commanded and forbidden in the word. Yea

such as the word doth clearly determine, though not

alwais clearly to the Judgemt of the magistrate & others, yet

clearly in it selfe. In these he of right ought to put

forth his Authority, though at tymes actually he doth it not.

disturbing the peaceable Administracion(e) of and exercise

of the worp [struck through] & holy things of God, & ye like, are

to be restrained & punished by Civill Authority (a) deut.13.

If any church, one or more shall grow schismaticall,

rending it selfe from ye communion of other churches, or shall,

walk incorrigibly or obstinately in any corrupt way

of their owne, contrary to the rule of the word, in such

case the magistrate is to put forth his coercive power

as ye matter shall require. The Tribes on this side Jordan

intended to make warre agt the other Tribes for building

the Altar of witnesse, whom they suspected to have